Seriously, if I’m at all responsible for Lewis thinking he should sing, I’m really sorry. Like, this is probably worse than the time I got caught with the transvestite hooker.

Amazing Gracias to Formula 1 Blog for the singing link telegram.

Things are looking up for Lewis Hamilton. He still has his girlfriend, Pussycat Dolls lead singer and X-Factor judge Nicole Scherzinger, as well as a new dog, named Roscoe, and a brand new jet worth £20m. The one thing he gained by going to Mercedes was a bit of autonomy and that could allow him to re-focus on his music. the one thing he loves and hasn’t seen to fruition.

That could be a case of history as producer Angel has been working with Hamilton and has recorded 12 songs. Angel said:

“He sounds better than certain singers. He’s a proper singer. It’s a breath of fresh air. He’s got a smooth vocal,” said Angel.

“I hope (he does release them) because it’s actually crazy. Right now he’s just recording. He’s a perfectionist. He doesn’t want to rush. If it doesn’t sound right, he’ll record it again.

How’s that for an endorsement? Comes in handy having a music business girlfriend and a desire to record songs. Lewis is a lover of music and has spent a lot of time learning guitar and one presumes having a well-known producer to handle vocal production, well that is the icing on the cake. Angel said:

“I was chilling in a restaurant and he was in the studio opposite. My manager got an email saying he’d been referred to us after hearing I did vocal production. We left the restaurant and went straight over and the day after we started working together.”

Hamilton came under criticism two years ago when his personal life seemed to be adding distraction and stress on his professional life. His on-track performance seemed to struggle from time-to-time and he admitted that his eye was off the ball… at the expense of McLaren. His desire to record music, travel with his pop music girlfriend and chill with Hollywood folks may have gotten in the way of his desire to be world champion again.

Will it have an impact on his new role at Mercedes? Most likely not as Hamilton proved last year that he is capable of re-focusing and getting on track with a terrific performance that came short of a title. Hamilton likes his new life and if the team keep asking teammate Nico Rosberg to stay behind Lewis, as in the Malaysian Grand Prix, then his life can only get better as the clear number one at Mercedes.

HAM – “So, guys! Guys! I’ve totally decided to join the awesome ranks of people-who-are-pretty-good-at-one-thing-but-pretty-much-suck-at-another and I’m totally recording another album/dropping some mad cash on studio time since I have so much money I don’t know what do with it all. Ok, ok, I know: Leonard Nimoy, William Shatner, Eddie Murphy, Bill Cosby, Don Johnson, Philip Michael Thomas, Bruce Willis. .. I  know! It’s an impressive track record! A daunting task to achieve more than these guys have, musically, right? But I think I’m up to the challenge! Also, money.

Even though this album-thing already kinda became a thing with my last team, I figured: Hey, it’s new team, a new start. I know all the other drivers succeed by being completely committed to driving, to racing. I kinda think: it only bit me in the ass once before, I should try it again! Besides: I am Dope Beats! Really: I am. And I don’t say that just because I paid Jan Smith a kazillion dollars to say my name in the same breath as Drake and The Biebs. She did that ’cause I’m AAAAWESOME. (Confidential to all y’all: How do I know this album will be dope? Nicole and I did this thing with the Ouija Board and we totally contacted Rick James in the afterlife! For reals, yo! We dropped some tracks for Rick’s ghost and said it was at least as good as Eddie’s best tracks! Awesome, right!? Then his ghost asked us for some crack. . .but, awesome, right!!??)

Don’t worry, Merc! If I start sucking at racing, I’ll just blame the tyres. OMG, those A-holes at Pirelli, amiright?!!

Bonus Translation: Angel – “Oh my GOD! These fucking checks that he’s writing me for sitting in the booth, listening to his cat-strangling, nodding my head to his “beats” are fucking HUGE! HUGE! 12 whole songs! 12 times I want my fucking soul back! Oh, but those sweet, sweet gigantic checks!” 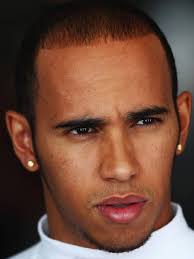 “I’ve a big bag of cherry Haribo if you can do some more distracting shit. Otherwise, I’ve gotta just make stuff up.”
“You smell like my grandpa.”

Danke to NBC Motorsports for the link.

Lewis Hamilton denies Bernie Ecclestone’s claim he had a chance to join to join Sebastian Vettel at Red Bull this year.

According to Ecclestone talks were held at the British Grand Prix last year for Hamilton to replace Mark Webber at the team. But Red Bull owner Dietrich Mateschitz opted to give Webber, who won the race, first refusal on the drive.

Hamilton said he didn’t know what to make of Ecclestone’s claim: “I think he said something about me talking to Red Bull?”

“I said to my management team to speak to all the teams and give me what the best options were. There was no particular one that I was pushing for more.”

Ecclestone said Vettel would have no objections to sharing a team with a driver of Hamilton’s caliber: “Sebastian wouldn’t have cared if Lewis had signed for the team.”

It’s the second time in five days Hamilton has distanced himself from remarks made by Ecclestone.

Heading into the Malaysian Grand Prix Ecclestone claimed that Hamilton would rather have taken a year’s sabbatical from racing than spend another season at McLaren.

“I don’t think I would leave this sport unless I didn’t have a good feeling about it, or a smile and an energy when I got in the car. I love racing, so there is no need to stop,” was Hamilton’s response to that suggestion.

However he did add: “I think Bernie has a better memory than me.”

ECC – Yoo-hooooo! Look over here! Pay no attention to the swirling police lights and group scream-therapy going on in Horner’s front yard! This is the real story, over here! Look over here! It’s Hamilton, being so Hamilton, you guys! Guys? Look? Over? Here? Guys. . . .. Wha. . . What was that? Woah. Is someone being led away in cuffs?!

F1 Services – This is actually kinda of perfect. The Bern-Dawg is simultaneously trying to distract us with Hamilton Antics(tm) and make it come off like Webber is the driver to whom Red Bull is being the most loyal. Me likey, Bernie!

Thanks to autosport.com for the link.

“I don’t regret anything at all,” explained the Mexican. “If they told me before we signed I would be in this position I would have definitely [still] signed with the best team.

You can, in fact, hide your lying eyes.

“For me, McLaren is the best team and after joining the team I am so happy. I prefer to be in this position with McLaren than at any other team and winning.”

PER: I fucking regret everything I’ve done since Hamilton confided in me – at the F1 Semana Santa Party – that he was thinking about leaving McLaren for Mercedes and I started thinking, “Well, if that dumb lymie bolts like the fresa he is, I’m on that shit like flies on carne colgando en el mercado!” And, sonofabitch, if it didn’t work. So, here I am, at McLaren and, dios mio, does their car mamar! Riiight, I’d rather here than with with any other team and winning. I’d rather be cantando Oaxaca, than having to smile while spewing this bullshit about being happy. I’m going to need to do, like, five miercoles locos at Christine’s in Ixtapa and make out with, like, 14 ugly gringas to get over this shit and we are only two races in. At least with Sauber, it was all “Can you believe how well Perez is doing with Sauber?!”. Ya la cargaste, Martin.

Danke to Planet F1 for the link.

Asked whether there was some relief that he wasn’t racing for McLaren at this time, Hamilton said: “No, I don’t look at them and think I’m happier.

“I look at our performance and realise just how good of a choice it was obviously.

When you hate me, it gives me power.

“The team have made some fantastic steps forward… let’s hope that this car stays competitive through the year and we can continue to develop it.”

Hamilton insisted that McLaren will recover from their Australian slump which he billed as a “little blip” for the Woking outfit.

“They have always been very strong at catching up… I feel that this is only a small little blip in their journey this year. I’m sure they’ll catch up.”

HAM: I’m completely obsessed with their failure. If I didn’t look at them as a reference, I wouldn’t be able to realize that I’m happier or know that we’re performing better. They’ve always been very strong at catching up, except, um, last year, when they were sabotaging me and I was sabotaging them and none of us would acknowledge it. I’m sure they’ll catch up. No, I’m not taunting them. I’m being supportive. Supportive to my old team. Whom I don’t look at.

I operate on higher plane of existence where I’m throwing a ball for Roscoe and Nicole is blowing me while I accept holy communion from my priest/agent.