“The cries of the oppressed? Yeah, no, I can’t hear shit with ALL THIS MONEY CLOGGING MY EARS.”

LONDON: Formula One has no concerns about this month’s Bahrain Grand Prix becoming a target for anti-government protesters, commercial supremoBernie Ecclestone said on Friday.

The race at the Sakhir desert circuit was cancelled in 2011 when a Shi’ite-led pro-democracy uprising was crushed and at least 35 people – activists put the tally far higher – were killed.

Last year’s grand prix, the biggest sporting event in the US-allied Gulf island kingdom and watched by hundreds of millions around the world, went ahead controversially amid tight security and against a backdrop of burning tyres and riot police firing teargas at petrol-bomb throwing protesters in Shi’ite villages.

Bahrain’s opposition and government resumed reconciliation talks in February for the first time since July 2011 and, even if little progress has been reported, Ecclestone felt the situation had improved.

“I haven’t had any negative reports from anybody there,” the 82-year-old British billionaire said as he prepared for a double header with the Chinese Grand Prix on April 14 and Bahrain on the 21st.

“Somebody who actually lives there came to see me yesterday and said everything’s very normal.

“I think they (both sides) are talking now anyway… so I don’t think they’ll upset the talks by making protests,” added Ecclestone. “It didn’t help them last year, so if they had any brains they’d just get on with their talks.”

Demonstrators have continued small protests on an almost daily basis to demand equality and a constitutional monarchy in the tiny kingdom ruled by the Sunni al-Khalifa family and home to the US Fifth Fleet.

At least 10 civilians and several policemen were injured last month during protests to mark the second anniversary of the arrival of forces from neighbouring Saudi Arabia which helped crush the uprising.

Police said the demonstrators had barricaded roads and torched vehicles. Pictures published in the foreign media have shown slogans daubed on walls calling for a boycott of the race.

Asked whether there was a risk of the race being targeted more directly after the protests and international pressure failed to stop it going ahead last year, Ecclestone said: “No, I think quite the opposite.

“No concerns, none at all,” he added. Ecclestone said he would again be in Bahrain for the grand prix, fourth round of the 19 race season, and praised local organisers for their efforts.

He assured them that Bahrain, the first country to host a grand prix in the Middle East and on the calendar since 2004, had a long-term future in F1 despite Abu Dhabi’s glittering floodlit race now being a much more popular fixture with both teams and sponsors.

“Yes, yes, absolutely,” he said. “Everything that is there is as far as we are concerned good. They do a very, very good job of the race, the whole support from the top is good. No problems.”

Ecclestone – “Somebody I know in Syria said shits cool there, too. I don’t know what all this hub-bub is about burning tyres and shit. As I said: “That’s normal.” Don’t any y’all listen to me? I haven’t heard bupkus on the newsreels ahead of “The Croods”. (We went last week: yo, that shit is HI-LARIOUS!) People tell me to check the Twitter. I assume they mean the ticker-tape machine that tallies my daily stock orgasms. It, too, has indicated that there is little valid suffering in this place called “Bahrain”, where I have a track, upon which my minions race for my entertainment. Also, money.

Look, seriously, any of you fuckers mess with my shit and we’ll pull some extraordinary renditions on your ass. You think I don’t know about torture? How ’bout you and I hang out at a photo op with WEB and VET?! Witnessing awkwardness of that magnitude kicks waterboarding’s ass any day. You’d need, like, two magnums of rosewater, later, just to relax. IT’S THAT TENSE!”

But, seriously: all my Bahrain homies! Chill out, yo!” 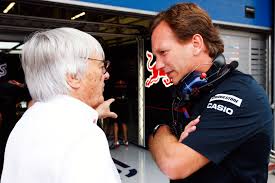 ECC – “Ok, I got it all worked out with Rupert. Tonight, I’m going to be in the rafters above the studio, working your arms and head. No, no, it’s ok: Rupe’s gonna digitize all that out before the signal hits the satellite. I’m going to be up there, ok, and VET’s going have his hand up your ass, working the mouth. Don’t get any smart ideas, Mister, or we’ll just make it look like you’re wanking it as you try to sing Skyfall on live TV.”

“I’ve a big bag of cherry Haribo if you can do some more distracting shit. Otherwise, I’ve gotta just make stuff up.”
“You smell like my grandpa.”

Danke to NBC Motorsports for the link.

Lewis Hamilton denies Bernie Ecclestone’s claim he had a chance to join to join Sebastian Vettel at Red Bull this year.

According to Ecclestone talks were held at the British Grand Prix last year for Hamilton to replace Mark Webber at the team. But Red Bull owner Dietrich Mateschitz opted to give Webber, who won the race, first refusal on the drive.

Hamilton said he didn’t know what to make of Ecclestone’s claim: “I think he said something about me talking to Red Bull?”

“I said to my management team to speak to all the teams and give me what the best options were. There was no particular one that I was pushing for more.”

Ecclestone said Vettel would have no objections to sharing a team with a driver of Hamilton’s caliber: “Sebastian wouldn’t have cared if Lewis had signed for the team.”

It’s the second time in five days Hamilton has distanced himself from remarks made by Ecclestone.

Heading into the Malaysian Grand Prix Ecclestone claimed that Hamilton would rather have taken a year’s sabbatical from racing than spend another season at McLaren.

“I don’t think I would leave this sport unless I didn’t have a good feeling about it, or a smile and an energy when I got in the car. I love racing, so there is no need to stop,” was Hamilton’s response to that suggestion.

However he did add: “I think Bernie has a better memory than me.”

ECC – Yoo-hooooo! Look over here! Pay no attention to the swirling police lights and group scream-therapy going on in Horner’s front yard! This is the real story, over here! Look over here! It’s Hamilton, being so Hamilton, you guys! Guys? Look? Over? Here? Guys. . . .. Wha. . . What was that? Woah. Is someone being led away in cuffs?!

F1 Services – This is actually kinda of perfect. The Bern-Dawg is simultaneously trying to distract us with Hamilton Antics(tm) and make it come off like Webber is the driver to whom Red Bull is being the most loyal. Me likey, Bernie!