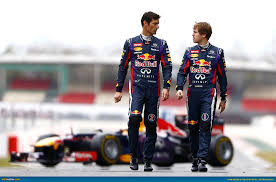 Webber: “I can see your ball sack shrinking.”

Psychologically, it must be very hard for you to deal with a guy who won’t sink to your level. It’s called fucking diplomacy.

Q: (Jonathan Legard – BBC Radio Five Live) Mark, how much have you resolved everything in your own mind over what happened at the last race and how to go forward and I suppose linked in there, is the haircut part of the new mean look?

MW: No, definitely not mate, the haircut’s not… it was a little bit of a screw up. Once he’d started he was on his way. Haircut is not part of the new look or new feel. Going forward, mate, I think we know everything that happened; obviously in Malaysia there was plenty of interest from everyone, other teams, media etc, but for me myself mate, it’s not an unusual situation and I’m looking forward to racing here this weekend and getting on with it. When you’re at the front in Formula One there’s always stuff going down so it just depends on how much is going down that you’ve got to manage. In the end, for me, I’m looking forward to driving the car here, putting in first gear and driving out of the garage and getting down there to feel what the car’s like on the circuit. That’s what I’m looking forward to, mate.

Thanks to SpeedTV for the link. 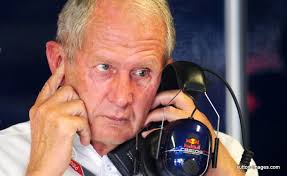 People say I’m tone-deaf. I don’t know what the fuck they’re talking about: I can hear just fine. I just stay like this until Seb has something to say. I hear just fine.

Helmut Marko insists preseason comments he made about Mark Webber were never supposed to be interpreted as criticism of the Australian driver.

Austrian Marko, seen by most as team owner Dietrich Mateschitz’s right hand man, said before the 2013 championship kicked off that Webber “can’t maintain form” throughout an entire F1 campaign and “has a little trouble with the pressure.”

Webber hit back by saying it is obvious he is not “part of Marko’s agenda.”Marko’s apparent criticism might have gained new significance in the wake of the recent ‘Multi-21’ affair, where despite the fact Sebastian Vettel ignored team orders in Malaysia, it is Webber’s place alongside him that appears most in doubt.But Marko is quoted by Spain’s El Confidential as insisting all the fuss about his preseason Webber comments was exaggerated.“First, the interview was conducted in German,” he said. “It just happened to be Christmas, and so it was translated into other languages.

“I was asked why Vettel is champion and not Mark, so I tried to explain the differences with some facts.

“I did not think it would be taken as a criticism of Mark,” he insisted.

Marko continued: “Mark has always been a driver with a good reputation, and I have always said of him that when he has a good car, he is a winner.

“But when he has a good car, unfortunately for him, so too does Vettel. So, psychologically, it must be very hard for him.

“In the circumstances,” Marko insisted, “the magazine tried to say that I was against Mark.”

Marko made the comments about Webber in an interview with Red Bull’s in-house magazine, Red Bulletin.

“Hey, uh, Marko. Ok, we just did a PR on the “No Team Orders” policy. We need you to get out there. . .get Seb’s dick out of your mouth for two seconds and call that guy you know at El Confidential. So, let’s be clear: no team orders, right? The gloves are off. You realize that WEB is going to lash out like an angry child, right? So, yeah, get out there and just say some shit that makes it look like you might not necessarily favor VET completely. I don’t know! Say it was mis-translated! Say it was Christmas! Say the moon was full and you were vacuuming and a black cat ran through your yard and a little elf pinched your bottom right as you were quoted! Say whatever the fuck you want. Wait, don’t do that.
Whatever you do, don’t patronize to Mark with some shit about how it’s “psychologically hard” to be around someone as awesome as VET. ‘Cause, yeah, that. Probably. Won’t. Help. We’re trying to convince Kimi to come over next year, you know?! Can you at least try to make this show not look someone’s inter-family brawl at a drunken picnic? Please?”

Danke to MotorSportsTalk for the link. 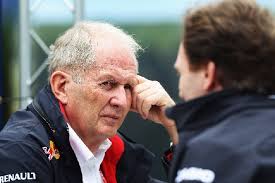 I see your lips moving, but I can’t hear what you’re saying.

Red Bull advisor Helmut Marko has revealed that the team considers the dispute between Sebastian Vettel and Mark Webber to be over.

Vettel ignored team orders to overtake Webber for the lead in the dying stages of the Malaysian Grand Prix last Sunday, as the internal tension at Red Bull boiled over for all to see. Although many believe the matter is far from over, Marko has assured the media that the issue has been put to bed.

“In the debrief afterwards, there was the relevant discussions about the race and then there was a handshake between the two drivers,” Marko said to the BBC.

Marko has frequently favored Vettel over Webber, calling the Australian “inconsistent”, but on this matter he has said that triple-champion Vettel was in the wrong.

“I don’t think he will do that again.

“They don’t have to be completely on the same page but it must be a solid working partnership.”

Although the handshake between the two drivers suggests that the situation is not irreparable, the matter is likely to still be the talk of the paddock when Formula One returns in two weeks’ time at the Chinese Grand Prix. However, Red Bull will be keen on drawing a line underneath the entire dispute, in order to prevent their championship charge being damaged from the inside.

Marko – “This shit is over because VET and I say it’s over. Anybody who continues to have a problem with this shit, they are the one with the problem. Then we’re gonna have a problem.”

You know, I remember this one time, I was a kid. This other kid: some asshole in his half-tint, rim-less glasses was giving me shit. Probably for being a fat dork, which, hey. Somehow, his mom gets involved and makes us shake hands. I never saw that kid again. I can assure you, my fat dork status notwithstanding, I would’ve attempted to kick the shit out of that kid, had we crossed paths.