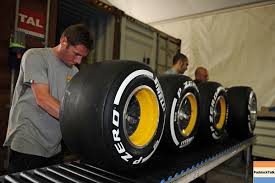 Pirelli technicians, seen here, use magic to add the essence of soiled diapers to each tyre. This special elixir is formulated to make all teams, less Lotus, CRY LIKE LITTLE WHINY ASS TITTY BABIES.

Thanks to F1 Junkie for the link!

Apr.17 (GMM) Paul Hembery has rubbished suggestions Lotus and Ferrari are getting an unfair advantage in 2013.

One theory doing the rounds is that Lotus’ E21 is kind to the otherwise heavily-degrading tyres this year because Pirelli’s test car is the 2010-spec R30 — which was designed by Enstone based Lotus’ former incarnation, Renault.

“We have certainly done everything to avoid any team getting any advantage from our test data,” Pirelli’s Paul Hembery is quoted by German magazine Sport Bild.

He confirmed reports that rival teams rejected a proposal to share the burden of providing Pirelli with a test car.

“We even proposed that they alternate with each other to test our tyres, but none of our proposals proved popular,” said Briton Hembery.

“So they can’t start complaining now.”

He smiled: “Someone told me actually that Jaime and Fernando don’t even talk.

“Anyway, how could a comment be converted into a design?” he wondered. “That’s hard to accomplish.

“And even if you could get something from it, it would be pretty minimal.”

PIrelli – Oh. My. GOD. You little BITCHES. Shut. The. Fuck. UP. McLaren! Shut up! Your car sucks! Perez is not panning out. It’s not the tyres! Red Bull! Shutthefuckup! Your drivers hate each other! You can’t get enough gas in your car, um, TWICE in two years. The tyres are the problem?! Let me see.. . . I think I have a mirror around here. . . Here we go: C’mere. Look in this mirror. See that? THAT’S YOUR PROBLEM!! Hammy! You, you. . . Oh, just shut up. Oh, yes, the secret is that Pirelli is an Italian company and ‘Nando is kicking ass, so there must be a conspiracy. Guess what I heard the other day? The fucking company that makes all the asphalt for all the racetracks is FINNISH!!!!!! They send the asphalt formula to Kimi via fucking ice dragon.