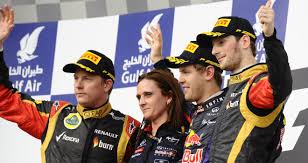 What a boring race. F1 is so boring right now. Ermigarrrd, I wish thay would just let these people race! Except for the strumpet. What the fuck is she doing up there, anyway?

Before we get to the post-race translations, a special memo to all y’all who have been complaining about F1 being so boring what with the tyres that degrade and the DRS and the KERS and this isn’t “Racing”. I respect your opinions, I guess, but after the race on Bahrain, with its fan-less stands and year-old dust puffing up off the track, um, with upmost respect, could YOU ALL SHUT THE FUCK UP!!!!!?? Um, please? Perez! Racing like a man possessed! How is that not “racing”?! Kimi! Going from 8th to 2nd! How is that not “racing”? Grosjean and his shiny, new chassis, going from 11th to 3rd! Massa’s sad, epic collapse! Perez and Button having a domestic all over the track! Holy shit! I though I was watching an Early-Nineties episode of “Cops”!

IT WASN’T BORING! IT WAS “RACING”!