Thanks to Mirror and McLaren Soul for the link. 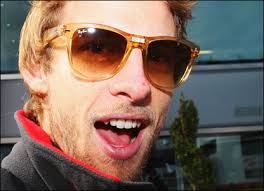 Have you surfed Craigslist Mexico for used buses?! It’s all FREAKS! However, hey, they generally come with all their wheels! Hah! Ha. Uhhh.

Jenson Button roared ‘don’t write me off’ and insisted he could still be world champion this year.

And the 33-year-old said the scale of McLaren’s remarkable turnaround in Sepang had been so significant he has a smile back on his face despite scoring just two points in two races.

After struggling to ninth in a disastrous Melbourne debut for the radical new car the 2009 champion said his car would never win a race in its current state.

But just seven days later engineers unlocked the car’s true potential and Button was squaring up to battle Lewis Hamilton for a podium place in Malaysia.

Only a pit stop cock-up ruined his chances.

“The championship is still on as far as I am concerned and I am aiming for that. Definitely,” said Button.

“Sebastian almost beat me to the title in 2009 and he didn’t score for the first four races.

“We are still not where we want to be and we got a bit lucky with the circuit being so smooth which helped a bit but a lot is understanding where the downforce is.

“The car is still not perfected, it was really thrown together for Sepang.

“The great thing is there are so many cars that are competitive and taking points off each other, which is exactly what we need.

“It was such a positive weekend until the pit stop and it hurt. And it hurt when I woke up the next day knowing we scored nothing and we could have, at worst, been fifth.

“It is what it is. We’ve got to move on and look forward to China.

“I just wish it wasn’t around three weeks away. In a way, though, that’s good because it gives us extra time to work on the car.

“For us the gap means more than it does to most teams because it gives us time to perfect the car.

“I am a very happy driver at the moment knowing we have improved so much.

“And I know what the team can achieve over the next few weeks to take a strong car to in China.

“I have gone from being pretty down in Melbourne to being a lot more positive in the five days between the first two races.

“Things are not all sorted. We still have issues and need to get the car’s ride sorted but in terms of development the car is much better. We’ve had a massive turnaround.

“We are still off the pace of the Red Bulls but it is still amazing how much you can move forward in five days and I was surprised to be in fifth and still being able to see the leader.”

BUT – “Hah. Yeah, Sergio and I were already shopping Craigslist in the D.F. for an old Estrella de Oro bus to race instead of the car. If we got a Plus model, we could transport the team and they could watch movies on the bus! Maybe even during the race. One of the mechanics has a pirated copy of “Rush” he got in Sepang.

When I say “it was really thrown together in Sepang”, I’m pretty much admitting that we really did have those pontoons on there with zip-ties. I know it sounds crazy, but it would have been awesome! We had all this extra space for the livery. But, hey, the cleansing monsoon we needed didn’t arrive.

But, seriously, the car was fucked, FUCKED! at the beginning of the year, and we’ve really made some headway in decoding the curse that HAM left, scribbled on the back of a Haribo bag. I think we just need a pair of ridiculously large, diamond earrings to correctly shine light on the text to reveal the answer.”